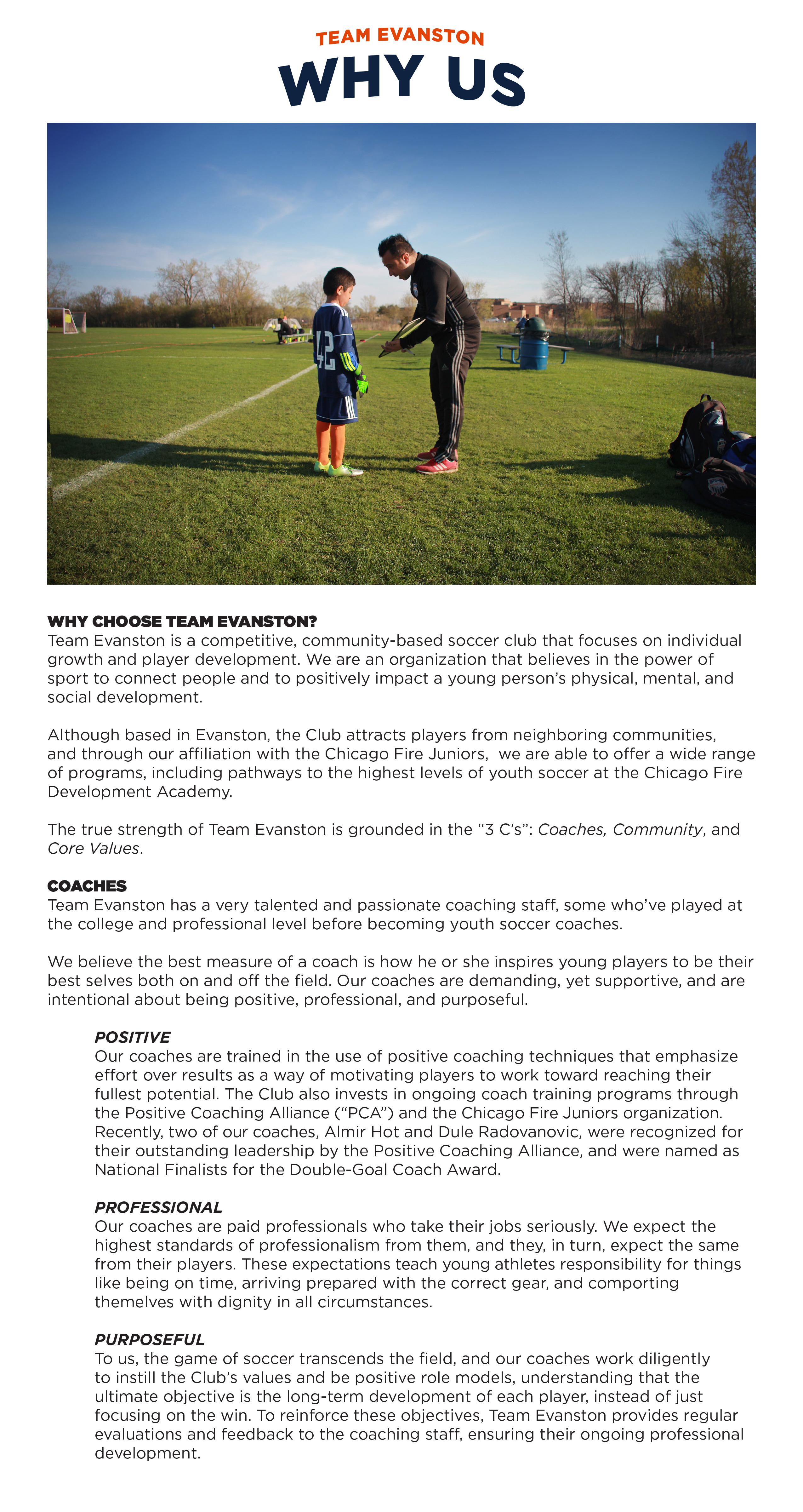 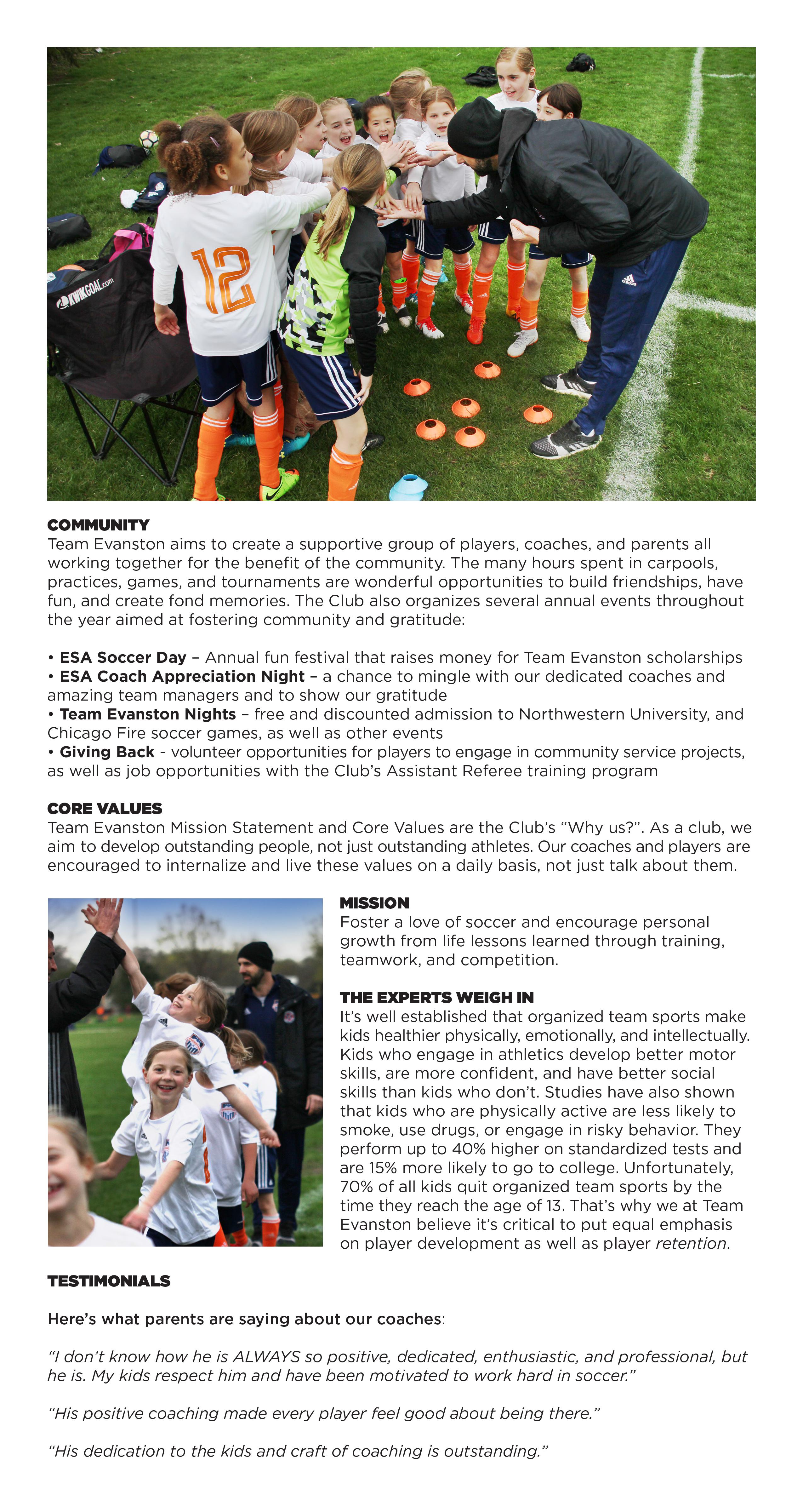 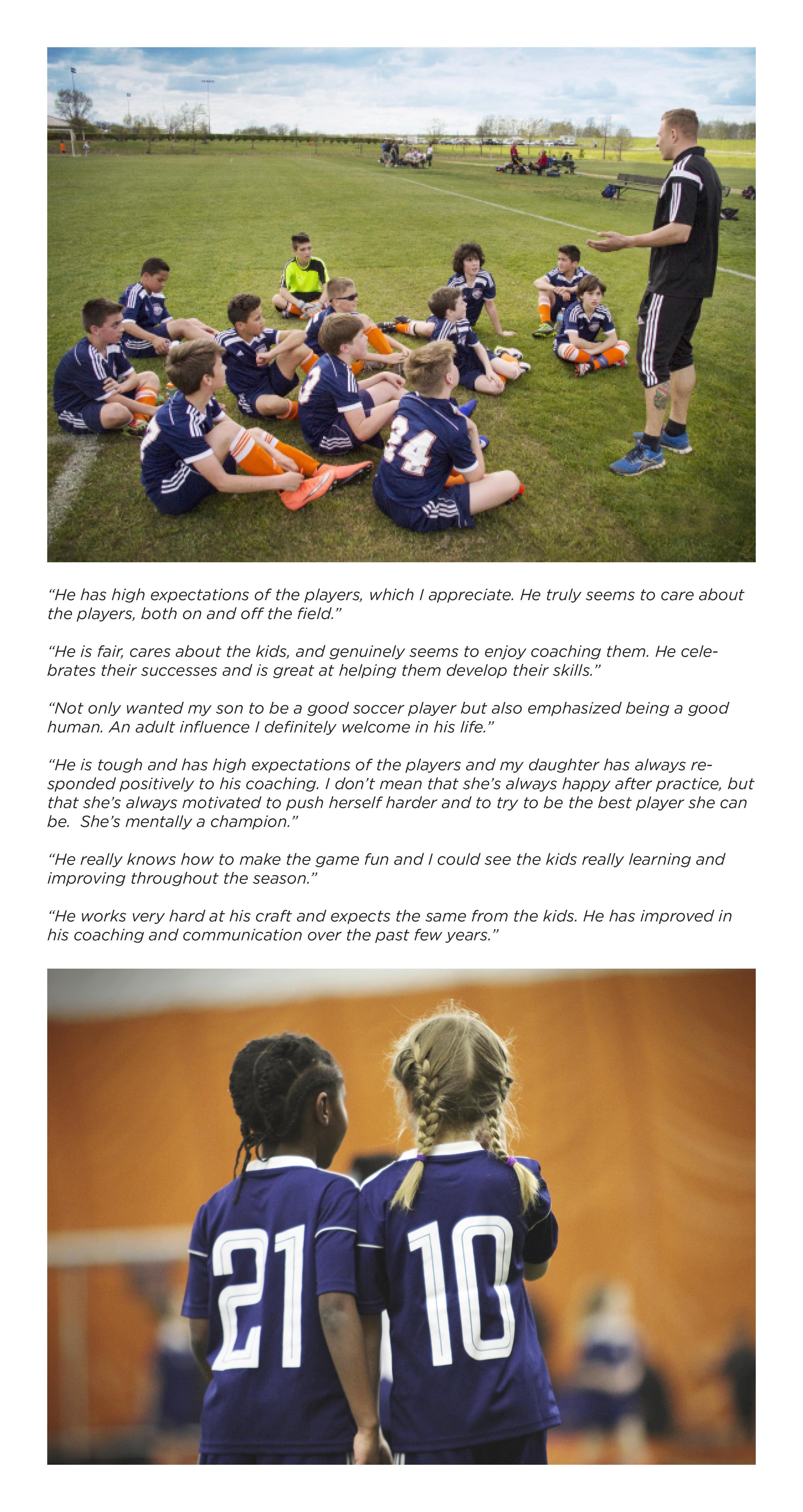 Team Evanston is governed by the Evanston Soccer Association Board of Directors and managed by two Directors of Coaching.

Evanston Soccer Association Board of Directors

Team Evanston was officially founded in 1991 through the merger of Evanston’s two premier traveling youth soccer clubs – Gross Point Soccer and Pele Stars. The main purpose of the merger was to unite Evanston club soccer under one umbrella organization and to improve the overall quality of youth soccer in Evanston. Both clubs had a great tradition in Evanston but agreed it was time to pool resources and talents to create a better experience for both boys and girls in Evanston.

Named after the landmark Evanston lighthouse, Gross Point Soccer was principally a North Evanston club formed in 1973 by Eric Nygards, a former player with the Swedish Olympic Soccer Team. He had assistance from a fellow European player, Jack Reinhardt. Eric and Jack both grew up playing soccer in their home countries and had met through their involvement with Evanston Youth Hockey. The team colors of the club were maroon and white.

Named after the Brazilian soccer star Pele, Pele Stars was founded in 1977 by two Haitians who had moved to the Southside of Evanston, Francois Calixte and Jean Jacque Gregoire. Known principally as a South Evanston club, François and Jean Jacque were both accomplished soccer players in Haiti and in the United Sates. They wanted to create a soccer team for their children and friends. The team colors for the Stars were blue and gold.

Though the merger did not happen officially until 1991, the first team was an under 12 girls' team in 1989. However, while both clubs were considered co-ed, the vast majority of players were boys. There was an all girls league in the Chicago area, but the handful of girls in Evanston who wanted to play club soccer in Evanston had to play with the boys. Recognizing the growth of girls’ soccer, John Ward put together the first team comprised of girls from both Gross Point and Pele Stars. This club became known as Team Evanston.

The following year, the first Team Evanston boys’ team was formed at the U10 level and a second girls' team was formed at the U10 level. The team colors for these three teams were red, white, and blue. The two clubs officially merged in 1991 and consisted of seven boys' teams and four girls' teams playing in the U9 through U14 level. The colors switched to navy and orange in recognition of the Evanston High School colors.

Today, Team Evanston consists of 25 boys and girls teams, including approximately 300 children playing from U8 through U12. Though the organization is still run by a volunteer board, all teams have paid and licensed coaches. The club also has a paid director of coaching responsible for the hiring of coaches and development of curriculum for all age levels.

Being an athlete is not just limited to learning appropriate skills and techniques of a sport, but it is so much more.  From knowing how to conduct themselves on and off the field, as well as learning how to be a valuable member of a team, your children develop both social and cognitive skills that they can draw upon for the rest of their lives.

At Team Evanston soccer club, we teach our young athletes fundamental skills of the game, developing a strong foundation to help them excel as successful soccer players now and in the future.  Our professional coaching staff will provide a positive environment in which your children will learn to interact with and respect their coaches, teammates, opponents, referees, and spectators.

Our club follows a structured, age-appropriate curriculum designed by the director of coaching and based on U.S. Soccer developmental guidelines.  Every training session is built to maximize touches on the ball and to encourage players' creativity.

And please remember, as this age, it is about development first and not just winning.

Young players need freedom of expression to develop as creative players...they should be encouraged to try skills without fear of failure."